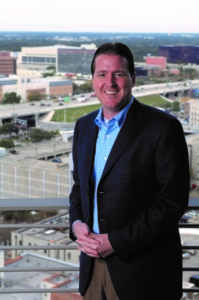 Craig Ustler, MAI, CCIM is the Owner and President of Ustler Development, Inc., a real estate development company, and Vice President of Ustler Properties, Inc., a commercial real estate brokerage company.  For over twenty years, Ustler has focused on urban infill projects as advocated by the “new urbanism” planning movement. In particular, projects have been concentrated in Downtown Orlando , where has led many significant developments, along with area neighborhoods, including the Central Business District, North Quarter, Thornton Park, Creative Village and Health Village.

Ustler has received numerous awards and recognition for business excellence and community involvement including: “John Nolen Medal for Contributions to Urbanism in Florida” by Congress for the New Urbanism Florida in 2021, “Developer of the Year” by Orlando Business Journal in 2019, ”Florida, along with many awards for his leadership and contributions to Downtown Orlando.

Ustler is active in several community organizations. He currently serves on the Dr. Phillips Center for the Performing Arts Board and the Urban Land Institute Central Florida Advisory Board. For many years Ustler was the Co-Chairman of the Urban Think Foundation Board. He served on the Executive Advisory Committee for Project DTO. Ustler is the founder and past president of the Downtown Orlando Foundation and has served on the board of the Historical Society of Central Florida.