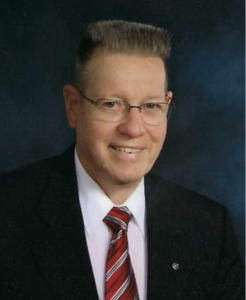 A TRIBUTE TO 60-YEAR-ROTARIAN JOE STINE.

Joe Stine is a professional engineer with a long history of service to his profession, his community, his church, and to Rotary Club of Orlando.  Joe is a native of Central Florida and for most of his life has resided in Orlando.  After graduating Orlando High School, he attended University of Florida where he earned a Bachelor of Industrial Engineering. He was inducted into Blue Key, the university’s top leadership organization.  While at UF, he was an Air Force ROTC student earning Cadet Colonel and Distinguished Military Graduate honors.  He then entered the USAF as a Lieutenant serving as navigator in the Strategic Air Command refueling strategic bombers in flight.

After serving one tour in the USAF, Joe returned to Orlando and joined Harry P. Leu, Inc., a distributor of industrial products serving Florida, the Caribbean and South America.  He advanced to Executive Vice President in 1967, and to President in 1978.  Joe served as president until 1987 when the company was sold and merged with a larger corporation.  While employed at Harry P. Leu, Inc., Joe completed his registration as a Professional Engineer and was active in equipment design, and an innovator in the use of computers for inventory management and marketing systems.  He continues to serve as Trustee of the Harry P. Leu Foundation.

An innovator and inventor, Joe holds five US Patents for agricultural, medical and refrigeration inventions.  Capitalizing on his patents, Joe formed his own company, Tree Planting System, Inc., in 1986 and upon leaving the Harry P. Leu company, operated it manufacturing equipment for tree nurseries employing applications of his own patents.  He remained president of the company until 1993.

While operating his own company, Joe’s reputation and demand as a consulting engineer grew and from 1989 to the present, Joe has operated as a consulting engineer.  His areas of expertise include mechanical equipment design, hazardous material handling and hazardous waste management, contamination assessment studies, permitting, and environmental issues for manufacturing plants.  He was a Certified Hazardous Materials manager (now retired).

As a professional engineer, Joe served his industry in many capacities.  He is a senior member of the Institute of Industrial Engineers, a charter member and past director of the Central Florida chapter, and chairman of the Institute’s Environment Committee.  Joe served as a director for the Florida Wholesalers Association in the 1970’s and 1980’s, President of the Southern Industrial Distributors Association 1972-73, and as director of Associated Industries of Florida 1980-84.

Joe’s impact on the community through his roles in community activities has been equally, perhaps more extensive.  A member of the Rotary Club of Orlando for 60 years, Joe has served numerous terms as director and many other terms as chair of key committees. Joe has 55 years of perfect attendance.   In the Orlando community, Joe was a member of the Citizens’ Advisory Committee guiding the Orlando Growth Management Plan, was Chair of the Heart of Florida Capital Fund Committee 1994-2000, and has extensive service and awards for guiding the Central Florida Council of the Boy Scouts of America.

A member of First Presbyterian Church of Orlando, Joe was elected an elder in 1966 at age 32, the youngest elder ever for that congregation.  As an elder, he has served on numerous committees of the church including two terms a Clerk of Session, the highest elected position in the church.  As elder, Joe served as commissioner to the Presbytery and Moderator of the Presbytery, it ruling body, and also served as commissioner to the denomination’s general assembly in 1983.  He has served as Sunday School teacher for youth and adults for nearly 60 years.

Joe and his wife, Joan Lemke Stine, have been married for sixty-four years.  They have six children and ten grandchildren.