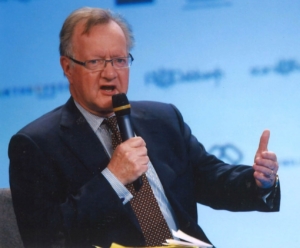 DEAN JOHN QUEICH: US AND EU MUST FACE CHINA ECONOMIC ISSUES TOGETHER

John Quelch became dean of the University of Miami Patti and Allan Herbert Business School on July 1, 2017. He is the Leonard M. Miller University Professor and also serves as the University’s vice provost for executive education. Quelch has a wealth of senior leadership experience, having previously served as the dean and senior associate dean at three internationally-recognized business schools.

Prior to joining Miami Herbert Business School, Quelch was the Charles Edward Wilson Professor of Business Administration at Harvard Business School. He also held a joint appointment as professor of health policy and management at the Harvard T.H. Chan School of Public Health – the first to hold dual primary appointments in those two schools, and one of only a few faculty members across Harvard University with this distinction.

Prior to his most recent time at Harvard, Quelch was dean, vice president and distinguished professor of international management of the China Europe International Business School (CEIBS) from 2011 to 2013. Under his leadership, annual revenues increased by more than 25% to over $100 million; the school’s MBA global ranking in the Financial Times improved from 24 to 15 and its Executive MBA ranking from 18 to 7; and the school launched programs to integrate faculty and staff activities across four CEIBS operations in Shanghai, Beijing, Shenzhen and Ghana.

From 1998 to 2001, Quelch served as dean of the London Business School, where he helped transform the school into a globally competitive institution and launched seed capital funds to invest in student and alumni start-ups. By 2001, London Business School ranked 8 in the Financial Times MBA global ranking.

Quelch is the author, co-author or editor of 25 books, as well as numerous business case studies on leading international organizations. He also is known for his teaching materials and innovations in pedagogy; during the past 40 years, his case studies have sold more than 4 million copies.

Quelch has served on numerous corporate, nonprofit and public agency boards, including a nine-year term as chairman of the Massachusetts Port Authority. He is a member of both the Trilateral Commission and the Council on Foreign Relations.

Quelch earned his BA and an MA from Exeter College, Oxford University; an MBA from the Wharton School of the University of Pennsylvania; an SM from the Harvard T.H. Chan School of Public Health; and a DBA in business from Harvard Business School.

In addition to the United Kingdom and the U.S., he has lived in Australia, Canada and China. He was appointed a Commander of the Order of the British Empire (CBE) in 2011 and, in 2017, was elected a member of the American Academy of Arts and Sciences.