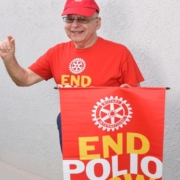 Born and raised in Lowell MA, Mark graduated from Nichols College in Dudley MA and was in the insurance business for over 40 years. He was president and treasurer of his own insurance agency and enjoyed mentoring his clients with all matters pertaining to their businesses. He now uses his business experience as a volunteer mentor with SCORE.

Mark became a member of the Westford MA Rotary Club in July of 1973. He knew about Rotary because it was made up of people who were influencers in the community. During his many years in the Westford Rotary Club he held several leadership positions including President in 1977. In 1996 Mark was the Group Study Exchange Team Leader to South Africa where he spent five life altering weeks in the Durban area. Mark is a multiple Paul Harris Fellow and a Major Donor.

In 2007 Mark came to Lakeland looking for a place to retire. The first thing he did was find The Lakeland Rotary Club where he was eventually sponsored by Joe L Ruthven, club president 2018-19.  Mark has been club Secretary for 4 years and the club Foundation Chair for 3 years. He has also served on the District Foundation Committee for 5 years.

Mark has been married to Irma Cole since 2011. She is an antique dealer and also a multiple Paul Harris fellow and major donor. Mark is the proud father of Jeffrey and Aaron and grandfather to 8 amazing grandchildren.  Aside from Rotary and SCORE, Mark is involved with his synagogue, and has been active in the Homebuilders Association, Boy Scouts and politics. He enjoys exercising, reading, movies, travel, and teaching people how to speak without the letter ‘R’.

Did You Know
Scroll to top