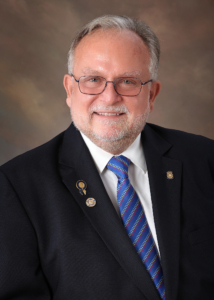 Barry joined the Seminole CountySouth Rotary Club in 1997 and has had perfect attendance.

Since that time. He acted as President of his club in 2003-2004 and has led his club’s youth Programs and chaired its Scholarship Committee for most of his tenure. He served on the District RYLA Committee for fifteen years and has served as District Chair of New Generations and Interact as well as Assistant Govemer twice. In addition, he has had the opportunity to lead tw

In his professional life he has worked for Arthur Andersen, Ford Motor Co., a German trading company and aIso owned a window treatments business for 22 years. In addition, he served on the Seminole Countv SchooI Board.  He has been married to his wife, Lynn for 50 years and they have two daughters and four granddaughters.